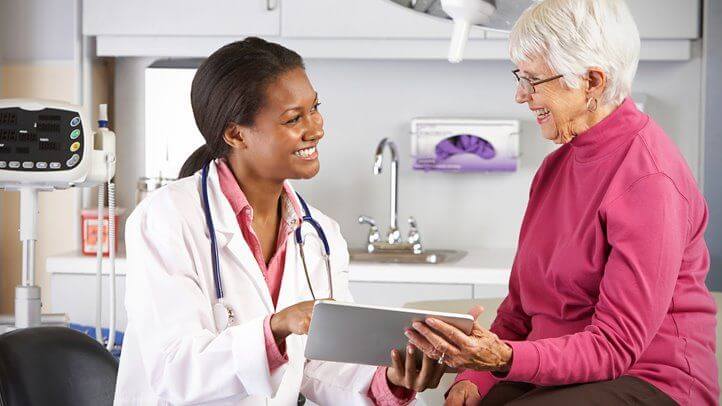 In the winter edition of Community magazine, we conducted two separate interviews with Pulmonary Hypertension patient Amanda Harvey-McKee and her doctor, Murali Chakinala. We asked them to individually discuss Amanda’s diagnosis, and how they’ve spent years increasing awareness on PH.

We did not have the easiest relationship starting out. Now, we work really well together, but it’s been eight years in the making.

I was a biomedical research lab manager at the time of my diagnosis. At that time, not a lot of people knew what pulmonary hypertension was. We didn’t know what the treatment was (for a person who had PH secondary to a blood clot), what the diagnostics were, it was all very new. Things have changed in the past eight years, but back then, not a lot of information was readily available.

At that moment of diagnosis, you’re trying to figure out what it all means, trying to define the big words – it’s a lot. And I even felt like I had an edge over other patients because I did come from a medical background, but in that field at that time, there just was not a lot of information about PH. So I started at zero like everyone else.

My primary care physician said that Dr. Chakinala was the person I needed to see. He was the expert in his field, the up-and-comer, and he was who I needed to talk to.

When I first saw Dr. Chakinala, he had a resident with him, and I fully appreciated that. But when you’re in the patient chair and not the teaching chair, it puts things into a very different perspective. It was very frustrating to me to sit and listen to them argue overpressures and counts and scores and tests and numerical values when ultimately I just wanted to know what I was supposed to do with this disease.

I left Dr. Chakinala’s office with him telling me I didn’t need to be considered for a very complicated surgery (PTE-pulmonary thromboendarterectomy) at that time. So just as I was wrapping my mind around the possibilities of a new game plan, a few days later, he called me at my home and said I needed the surgery.

That completely irked me, to be honest. So after our first meeting, and that phone call, I felt really disheartened by the whole healthcare system. It added further confusion and frustration and meant that I needed to start preparing for what would inevitably be a life-altering procedure.  It was too much and I went into a bit of denial. This turned out to be a mistake on my part because Dr. Chakinala did the right thing: he went back to review everything again, seeing that my situation wasn’t straightforward. And ultimately, he was correct in the decision that I needed the surgery sooner rather than later.

I told Dr. Chakinala, “Thanks but no thanks, I’ll call you if I need you.” And after a while, I did.

I went into heart failure and knew that I needed the surgery, so I called Dr. Chakinala, told him I needed a referral and he said no problem. I’m grateful that he was still willing to take me on as a patient.

After my surgery, I started at ground zero with him. I told him I wanted to get involved with PH, and he introduced me to a few people, and we started a PH journey together, so to speak.

I became a support group leader, and he became my go-to person for any medical question or patient question. He was and continues to be, very accessible to me. I’m very respectful of his time and status, but if I email him, he’ll get back to me right away.

I’m very fortunate to feel this level of security, just because my doctor is available when I need him. So from a patient perspective, and a support group leader perspective, Dr. Chakinala has really been invaluable to what I’m trying to do as an advocate for this disease. It’s a good relationship in that way. I had to let go of my controlling nature and have faith he was putting me first as a patient. Since then, we have had open communication, where I can ask questions and voice concerns without judgment and know I’ll receive honest answers. This leads to me being more involved with my care and allowing him to help me do so. Trust, comes down to trust.

Our history as a patient and doctor has evolved quite a bit over time. When Amanda and I first met, she was already in my opinion quite sick and I thought she needed to go down a certain path in terms of treatment, which I’m sure was daunting and scary for her. But I did feel that a proven, surgical intervention was the only treatment for her.

I met her when she was young, working, recently married – she was trying to lead a busy life, and telling her she needed invasive surgery wasn’t what she wanted to hear.

So no, we didn’t really have a solid relationship to build off of. Our immediate reaction to each other wasn’t the best. And at the time, she said she didn’t want the surgery, and we ended up not communicating for about a year. When I did see her next, her health was much worse and I reiterated my recommendation and she went and had the surgery.

Her recovery was long and rocky. She nearly didn’t survive. But she kept fighting and managed to pull through rather well. Now she’s doing great, a new person in terms of how she feels and what she’s able to do. She’s extremely committed to the Pulmonary Hypertension Association cause. She’s also fully aware of how lucky she is and how unlucky other patients are, so she’s doing what she can to give back and act as a resource for patients in need.

When I reflect back on all of this, I think Amanda and I would’ve done things differently, but I learned a valuable lesson. I was a young physician and I knew what she needed but I think I was a little too blinded and focused on the treatment and not thinking about what it meant to the patient and how much her life would be affected. And clearly, I didn’t sense that she wasn’t prepared for that kind of news. Instead of coming on a little softer and introducing the idea while building a relationship of trust, I was more unilateral with my opinion.

The lesson I learned is that there are treatments that we know a patient needs, but as a physician, we have to respect a patient’s decisions and ways of thinking.

That’s the difference between being a doctor who has got the initials in front of their name and a healer, someone who is really trying to help the patient. We can’t distance our patients, we have to cultivate the relationship and bring them along.